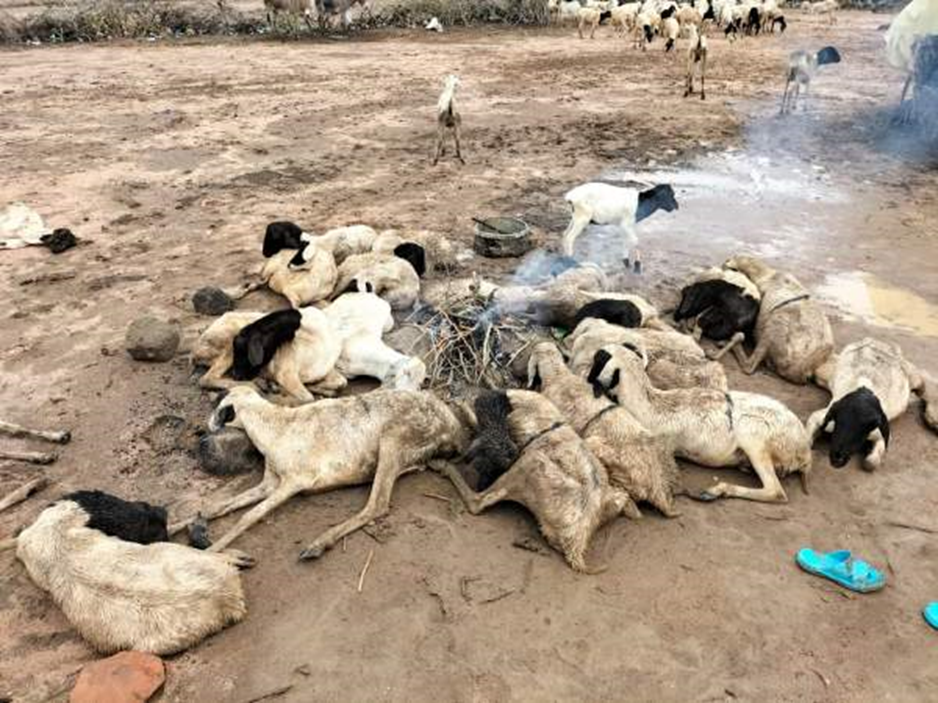 Sudden deadly losses: A glimpse into the climate future

On the eve of Eidul fitr this week, flash floods in Wajir west and south in Kenya led to the loss of dozens of livestock. Since the rains began in late March, Wajir county has experienced the loss of about 700 livestock, and displaced hundreds.

In India, billions are experiencing a climate emergency where temperature extremes hovering around 40°C, have led to hospitalizations and the deaths of 25 people in one state alone. Heatwaves are common in the Indian sub-continent, but this year the heat arrived devastatingly early with some parts experiencing highest average temperatures for March and April since the country began keeping records 122 years ago. Experts are stating that this year’s heatwave is testing the limits of human tolerance. This is because while everyone’s tolerance level varies, a wet-bulb temperature of 35 °C, is the average absolute limit of human tolerance. Above that, the human body is not able to lose heat to the environment efficiently enough to maintain its core temperature. And while one may not die straight away, if one cannot cool down quickly enough, brain and organ damage will start. Temperatures aren’t abating at night either, leading to increased electricity demand, and power outages,  in coal rich India, a trend which is expected to continue through May and June.

According to further research published early this week in New Zealand, the sea level is rising twice as fast as previously forecast with some areas already sinking 3-4mm per year, speeding up a long-expected threat of flooding in coastal cities in the country.

Climate emergencies are cropping up more suddenly, more commonly and for longer durations everywhere. We know that the law as it stands was not created with the challenge of climate change in view, and may not always be well suited to address it. In Kenya, a plethora of laws govern the sector – the Paris Agreement, 2015; the Climate Change Act, 2016; and devolved climate change laws in a few counties, govern mitigation actions and adaptation measures pertaining to the support of vulnerable livelihoods such as pastoralism in semi-arid Kenya. However, climate emergencies around us present strong lessons that if we do not move quickly to enact regulations, both at national and county level, to plan well and reduce exposure to climate hazards, establish architecture for early warning systems and new market mechanisms, as well as funding arrangements for adaptation costs, then the inevitable damage will be colossal. We know for instance that the national government through the State Department of Livestock is supporting pastoralists through climate insurance to mitigate drought induced livestock losses. However, there aren’t any existing instruments to protect people and livestock in the event of flash floods. The oft mentioned climate finance which may come in handy is very broad but even so, is still housed at the national level.

We cannot wait for international processes and reparation finance to mitigate losses, as some countries are busy fighting wars and looking into their own energy and food security. Our legal processes and instruments must be more adaptive and responsive to change. And that means devolving agile early warning systems in every county as well as climate finance units now, not later, and increasing both county and national investment into adaptation to save lives and sustain livelihoods that supports Kenya’s millions.

If you wish to learn more about climate insurance and adaptation, please reach out to me at halima@hawahussein.com

On the eve of Eidul fitr this week, flash floods in Wajir west and south in Kenya led to the loss of dozens of livestock. Since the rains began in late March, Wajir county has experienced the loss of about 700 livestock, and displaced hundreds. In India, billions are experiencing a climate emergency where temperature…

The power of billionaires: Learning climate lessons from twitter

Net-metering regulations in Kenya: What do you need to know?