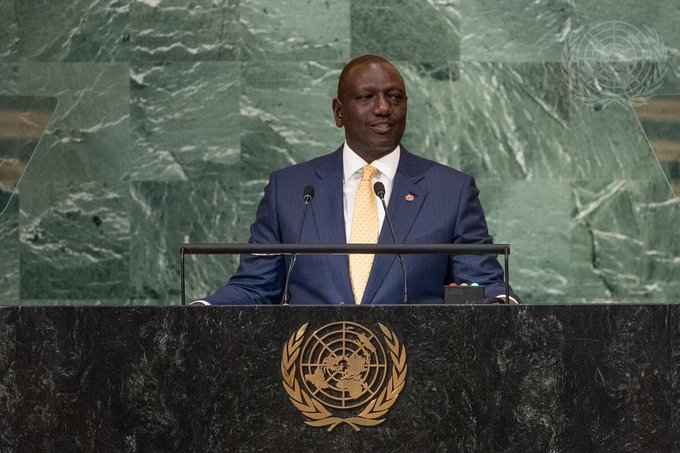 Philanthropy: A stop-gap to climate finance and debt distress in Africa

Debt distress and default was a recurring concern raised by leaders at the 77th United Nations General Assembly (UNGA) in New York, this week. At $70.7 Billion, constituting almost 70% of Kenya’s GDP, the current debt stock reigns over any development agenda in the country. The latest Treasury figures indicate that 60% of all tax revenues are set aside to service debt. This means that only 40% remains to take care of recurrent expenditure like payment of salaries, distribute to Kenya’s 47 county governments as well as address current drought and youth unemployment, among key crises- a herculean task for Kenya’s new government. This situation is replicated in many African countries. According to the International Monetary Fund (IMF), 22 African countries are currently debt distressed or at risk of debt distress.

In Kenya, the debt cap is set at $84 Billion, which means there is little room for more borrowing to supplement government revenues, though this may be revised later by Parliament. If they do this, they will have to contend with public anger that is incredulous at the government’s debt appetite, having seen the previous government increase debt by almost $60 Billion, from only $10 Billion in 2013.

President Ruto’s maiden presidential speech at this year’s UNGA laid bare Kenya, and other African countries’ realities on this front.  Economic shocks brought about by the double devastation of climate change and the Covid-19 pandemic make Kenya, and her African counterparts currently burdened by external debt servicing, vulnerable to default. The World Bank, IMF and other multilateral lenders holding this debt needs to suspend or reschedule debt payments, and in other instances extend total debt relief to the worst hit countries. This is the only way to avoid default, and support communities such as those currently contending with drought and food insecurity in East Africa, due to climate change. But will this happen? Sadly, most of the western world is distracted with a war in Europe, and energy and looming economic crises in their own countries. But even before that, there lacked political will by the G20 and other western countries to comply with commitments agreed in the 2015 Paris Agreement. As long as governments are in charge, growth and GDP reign supreme, and they will always postpone any loss and damage or polluter pays discussions to be dealt with by future election cycles.

But what if people made these decisions? What if people are at the centre of this decision making? Many people care about justice and that fairness governs decision making.  That those who did not contribute to their current crises should not bear the heaviest burdens. That it is unjust for countries who will lose as much as 2-6% of their GDP in tackling climate crises, like Pakistan in its ongoing floods, pay for this alone. In the current set up, there is one group of people that not only care, but have the resources to transfer a large percentage of their countries’ GDP, at once, to mitigate and improve the adaptive capacity of vulnerable communities to climate change.  Philanthropists.

The world’s billionaires, constituting just 3,311 individuals, represent almost $12 trillion in global wealth- more than 2% of global wealth. And combined with millionaires, the top 0.01% richest individuals, again only 520,000 people who have at least $19 million, hold 11% of the world’s wealth. Philanthropists in this group have the resources, power and flexibility that other institutions lack to make revolutionary changes to support social investments and much needed local led climate action. They can be role models in providing solutions to bilaterals and other development organizations who may not be open to taking risks and challenging the status quo in donor support. They can change the business model of philanthropy that sometimes gets bogged down by whimsical donations to maintain legacy and brand, to one that prioritizes real and meaningful change.

Philanthropists can voluntarily subject philanthropy resources to be taxed in Kenya, for instance, and increase its much needed tax base that the government needs to finance its development agenda. They can partner with researchers and organizations to conduct scoping and identify vulnerable counties, and deserving county governments, institutions and pathways to improve the lives and livelihoods, of ordinary Kenyans. Philanthropists can be at the centre of local solutions, at the centre of decision making, and ignite a people led revolution to deal with the current climate crises in developing nations. Philanthropists can leave a lasting legacy to mitigate debt distress in 22 African countries.

Philanthropists must surely know by now that with a lot of great wealth and priviledge, comes great responsibility, and immense opportunity.

If you wish to learn more about climate finance, please reach out to me at halima@hawahussein.com

Debt distress and default was a recurring concern raised by leaders at the 77th United Nations General Assembly (UNGA) in New York, this week. At $70.7 Billion, constituting almost 70% of Kenya’s GDP, the current debt stock reigns over any development agenda in the country. The latest Treasury figures indicate that 60% of all tax…

Governance and the economy in Kenya: Who decides?

Increasing water taxes amidst drought in Kenya: a case for reform